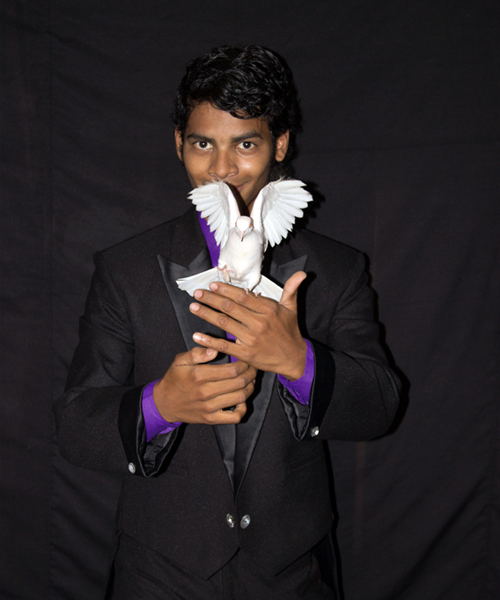 Magician Shiva Shyam is an award-winning magician with over 3000 performances in various countries. Began at the age of 8, Shiva has an interest in performing magic. His father helped him to become a professional magician by sending him as an assistant with Magician Janardhan from Hyderabad, India. He continued his magical journey starting as an assistant and later turned himself as a professional magician.

Shiva is known for entertaining kids through a variety of newly designed magic tricks which make kids laugh and cheer throughout the show. He is best known for his performances that are not only entertaining and thrilling but also educational.

Shiva has performed hundreds of shows to fight against the beliefs many people in rural areas of India has on effects of Black Magic and educated them the tricks and the real story behind them which was recognised by the government of India.

Best kids entertainer Of the Year 2014

Suitable for a group of 5-10 people, Shiva performs his sleight of hand card, coin and impromptu magic tricks which are mind blowing.

Suitable for birthdays and other parties, the show is hour long with interactive comedy magic which leaves them amused and entertained. Kids get a chance to volunteer for most of the show and he makes sure that every kid gets a chance to participate in the show and perform one trick with him.

Some of tricks include